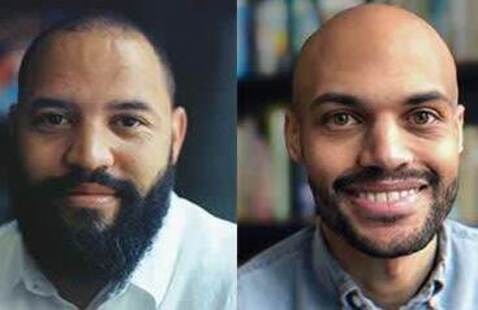 Jarrett Pumphrey and Jerome Pumphrey are authors of Creepy Things are Scaring Me, The Old Truck and The Old Boat. Cleverly illustrated and written to appeal to young minds, The Old Truck features a small farm where a young girl grows up while an old truck grows even older. Inspiration for the book came when Jerome was driving through central Texas on his way to visit Jarrett. As he passed farm after farm, he saw old, aging trucks sitting out in the fields.

The Old Truck is featured as Lenoir-Rhyne’s 16th annual Little Read, LR Visiting Writers Series’ community literacy initiative. The book is given to more than 2000 first-grade students from local elementary schools. It is funded by a grant from the family of Ron and Sandra Deal in memory of their daughter Sara Catherine Deal Temple, who loved children and teaching them to read. Long before The Little Read event is held, educators from the participating school systems come together to review and discuss the upcoming book and develop curriculum to aid the students in their studies. In addition, LR hosts a teacher reception that allows educators to share how they creatively taught and incorporated the Little Read book theme throughout their classes.

Jarrett is a storyteller and entrepreneur. He’s served as creative director for multiple technology companies and, most recently, as co-founder and CEO of a startup in the high-tech world of clear removable orthodontics. During his time there, he and his team crafted a compelling story, built a brand around it, and then sold it all in late 2017.

A member of the Society of Children’s Books Writers and Illustrators, Jarrett now spends his time writing and drawing in his home near Austin, Texas, where he lives with his wife, their two boys, and a dog named Whiskey. When he’s not writing or drawing, he’s fishing on a river somewhere or tinkering under the hood of his new-old 1956 Ford F100.

Jerome studied graphic design at the Art Institute of Austin and has worked as a technical writer, freelance graphic designer, and illustrator. Since 2016 he has been a graphic designer at The Walt Disney Company. Jerome uses design and illustration to visually tell stories in print, digital, and immersive experiences for Disney global business development. He works primarily from his home office near Austin, Texas, where he lives with his wife, daughter, and son.