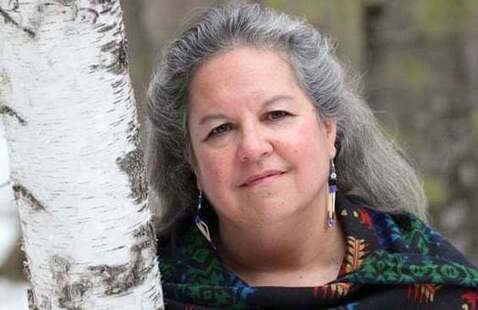 Robin Wall Kimmerer is a mother, scientist, The State University of New York Distinguished Teaching Professor of Environmental Biology, and enrolled member of the Citizen Potawatomi Nation. In addition, she is a founder and director of the Center for Native Peoples and the Environment, whose mission is to create programs that draw on the wisdom of both indigenous and scientific knowledge for shared sustainability goals.

She is the author of Braiding Sweetgrass: Indigenous Wisdom, Scientific Knowledge and the Teaching of Plants, which has earned her wide acclaim. Her first book, Gathering Moss: A Natural and Cultural History of Mosses, was awarded the John Burroughs Medal for outstanding nature writing, and her other work has appeared in Orion, Whole Terrain, and numerous scientific journals.

Kimmerer tours widely and has been featured on NPR’s On Being with Krista Tippett. In 2015, she addressed the general assembly of the United Nations on the topic of “Healing Our Relationship with Nature.”